Climate change impacts people of color, low-wage workers, and Indigenous peoples—here and around the world—first and worst.  Extreme heat, drought, floods, wildfires, storms, and poisoned oceans caused by fossil fuel pollution worsen the war, famine, poverty, violence, and oppression they already face. Many are left with no choice but to leave their homes and seek refuge in the U.S., only to be met with more violence and oppression by our own government.

Families are being torn apart. Ecosystems are collapsing. People are dying. The tide is rising...but so are we.

As governors, mayors, and corporate reps meet at the Global Climate Action Summit in CA—and as our own Governor & Legislature in MA continue to accept money from the fossil fuel industry and then fail to enact commonsense climate and immigration reforms—we’ll prove that real climate leadership rises from the grassroots up and doesn’t leave anyone behind.

On Sept 8 (and beyond), local climate and immigrant justice groups are joining forces to strengthen relationships across our movements, build collective power, and demand accountability and ACTION on climate change and immigrant rights:  100% renewable energy for all.  Dignity & respect for all.

Join us for the Climate, Jobs, & Justice outdoor “People’s School.”  It will start with a short kickoff rally that highlights the intersections of our issues, the failings of our political system in MA, and the urgency of this moment for us to come together and take action. The rest of the day will consist of interactive teach-ins, skill-shares, and art-builds that touch on a range of intersectional topics to educate folks, build relationships, and lift up the work of local frontline groups. The day would culminate in a closing action, yet to be determined.

Note about event location: East Boston is an Environmental Justice community, with majority Latinx and immigrant residents facing severe climate impacts from being surrounded by water, environmental burdens from Logan Airport, gentrification and displacement, and challenges due to immigration status--AND a long history of powerful organizing, resistance, and resilience. We are teaming up with local residents and organizations to put a spotlight on local campaigns for immigrant, worker, and climate justice, including GreenRoots' grassroots campaign against the construction of an Eversource electric substation on the banks of Chelsea Creek next to 8 million gallons of jet fuel in an area projected to flood. That's why we're holding our event at the East Boston Memorial Park, just across the road from the proposed substation site. On Sept 8, we will RISE with local community members to resist this and other instances of environmental racism in East Boston and throughout the city.
RSVP for RISE for Climate, Jobs, Immigrant Rights, & Justice in Boston on September 8th!

Out With a Whimper, Not a Roar

In the face of extreme heat, record-breaking wildfires, superstorms like Harvey, Irma, and Maria, and sea level rise that threatens to overwhelm our coastal communities, the Massachusetts legislature is responding not with a roar, but with a whimper.

The Senate deserves tremendous credit for passing a thoughtful, reasoned response that would have banned the public subsidizing of new gas pipelines, increased offshore wind, instituted a carbon pricing system, divested the pension fund from coal, given a needed boost to solar energy’s growth and equitable distribution, and tripled the rate of increase of renewable energy so that it would displace fossil fuels in our electricity sector by the late 2040s.

The House blew yet another opportunity to pass meaningful climate legislation, and clearly chose to align themselves with polluters and industry over people and planet by offering a smaller, temporary doubling of the state’s renewable energy growth that would see us phase out fossil fuels in our electricity sector by 2095 (the current law would do so by 2105) along with a handful of other smaller measures (including signalling but not commiting to additional offshore wind, more incentives for battery storage, and further addressing pipeline leaks). It also advances a clean peak standard which counts burning trash as a renewable energy source. (Not only does it encourage waste, but it produces horrible pollution for those who live near the facility.)

When faced with a stubborn House, the Senate’s leaders are wisely choosing to take the small step forward that they are able to--as in a crisis, every step counts--but we must be clear that we will no longer accept this status quo. We cannot continue to have a House of Representatives so taken over by fossil fuel and utility interests that they sit down when we need to be standing tall.

Many of us are rightfully pretty upset by this, and we’ll be in touch soon with constructive ways to channel our outrage.

Massachusetts missed a critical opportunity to show real leadership today, but let me be clear that the advances we did secure were due to the dedicated and persistent advocacy by this network and our allies. The House had no intention of taking action on energy legislation this year, and the fact that they did move the ball forward is a tribute to our efforts. Yet more is needed, and more will be demanded. Our planet, and people, deserve no less.

Why We Won't Rest on Climate Change & Immigrant Justice

On Thursday, July 19th, I gathered with over 300 supporters of climate and immigrant justice on the steps of the State House. Why? Because our legislators neglected to understand the urgency of two of the most pressing crises of our time.

Earlier that week, the House of Representatives failed to include a yearly 3% increase in the Renewable Portfolio Standard (RPS) and solar equity into their climate bill. During the same week, legislators also managed to omit key protections for immigrants in the budget, leaving thousands of our friends and neighbors in Massachusetts to fear deportation every day.

Our fight for climate justice is incomplete without immigrant justice.

As climate change continues to make large swaths of land uninhabitable, threatening food and water supplies, the number of climate refugees will only increase. Meanwhile, racist immigration policies that undermine basic civil rights and human dignity will endanger those already at risk.

That is why we gathered with the MIRA coalition to hear from climate and immigration leaders about the critical need for legislation to safeguard the futures of Massachusetts citizens and noncitizens alike. We then marched in, first to the office of Representative Sanchez and then Speaker DeLeo. With hundreds of us thronging the hallway, Representative Sanchez decided to ignore us. To ensure he knew our purpose, we delivered hundreds of pictures of our loved ones to his office to show him the reasons why we won’t rest on climate or immigrant justice. 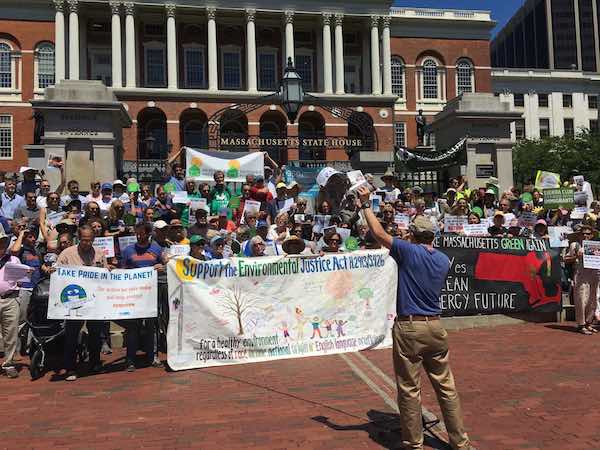 But we didn’t stop there.

We returned the following Monday. And Tuesday. And Wednesday. And Thursday. In greater numbers every day.

For four consecutive days, we held vigils outside of the offices of Energy Conference Committee members, mourning the futures of loved ones put at risk by climate change. We also met with legislative aides, and in some cases the legislators themselves, to share our stories, motivations, sadness, and determination in our fight to build just solutions to the climate crisis.

Sarah Fadem, from San Jose, California near the Santa Cruz Mountains, described how the fire danger signs in the forests used to change every day when they were young. One day the sign would read “moderate,” another day “high,” another day “low.” Now every time they visit home, the only signs they see read “high.”

Sarah’s story is one part of a large crisis. Sarah is fighting for climate change solutions because they don’t want to see the places they call home devastated by wildfires. Wildfires which have and continue to wreak havoc on the homes and livelihoods of thousands in California. In fact, as you can see below, six of the most destructive wildfires in the history of California have occured in the last year alone. 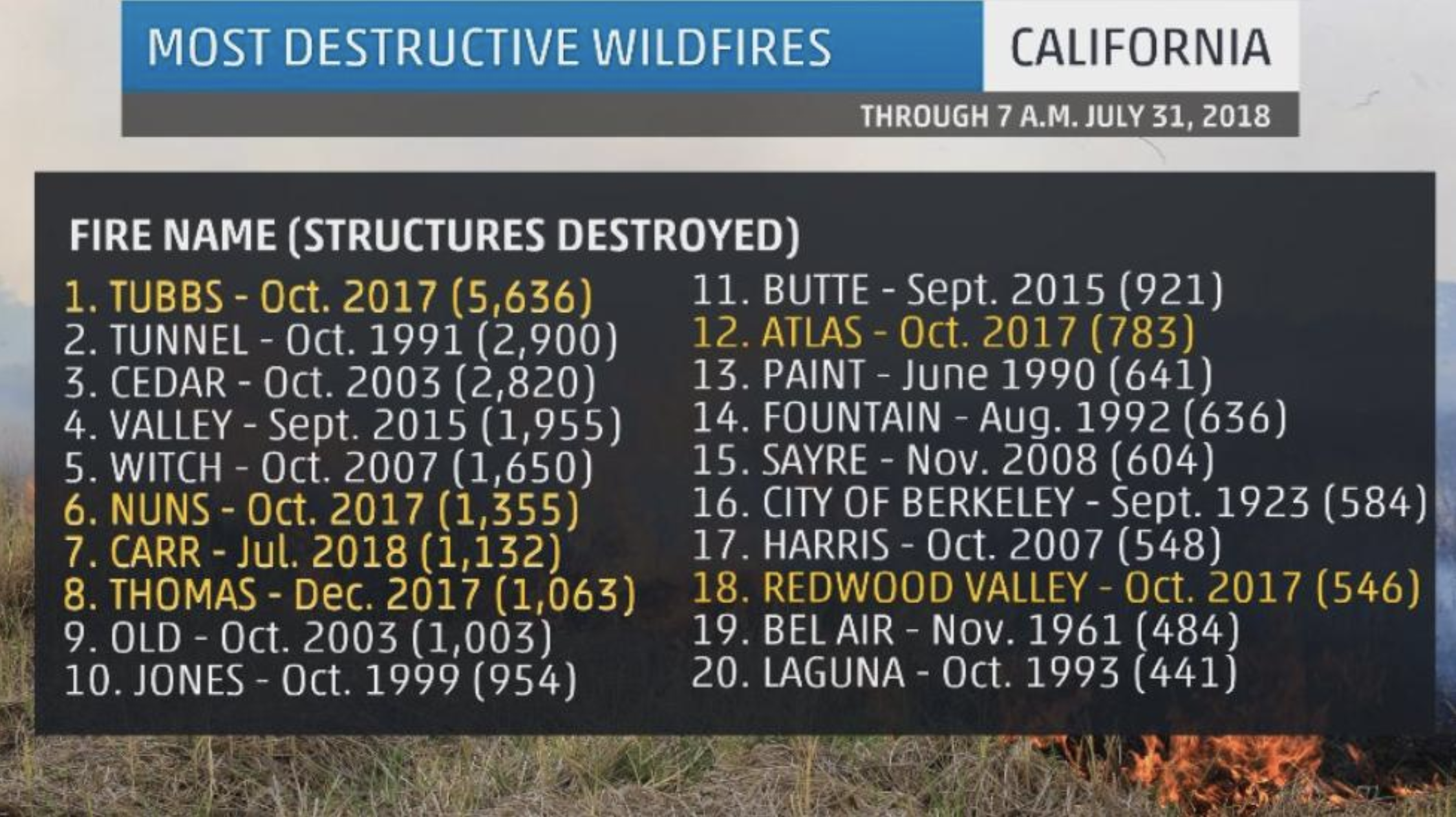 I heard similar stories from many folks about homes ravaged by storms and flooding. We shared our stories every day in greater numbers, until on Thursday we had over 50 people holding concurrent vigils at the offices of all Conference Committee members, as well as Representative Sanchez and Speaker DeLeo.

We concluded our vigils  by gathering on the Grand Staircase, marching together in song to the front steps of the State House as the first few drops of rain began to fall outside.

Donning life preservers, rain jackets, and umbrellas, we capped off our action with a rally in the pouring rain. We heard from environmental, faith, and immigrant leaders about why we were here, and as they spoke we raised a banner symbolizing the rising seas higher and higher above our heads. With the storm raging around us, we visually represented the disastrous consequences of state inaction on climate change.

Reverend Ian Mevorach then spoke about the need to create a world founded in love and cooperation. Citing the corporate influence in our politics and the need for racial equity, he declared that “a partial democracy is not a democracy, and partial equality is not equality.” A society that prioritizes corporate interests over people and only protects those most privileged is not a functioning society.

Let us take these words to heart as we continue our fight for climate justice.