Over the last two years, the international fossil fuel divestment movement has grown like wildfire, and Massachusetts has been at the heart of the action. More cities and towns in Massachusetts have passed pro-divestment resolutions than in any other state, dozens of religious institutions have divested, and there are active divestment campaigns at almost all of the state's colleges and universities.

In addition, 350 Massachusetts is leading a ground-breaking campaign to make Massachusetts the first state in the nation to divest our pension fund. We've already won the support of State Treasurer Deborah Goldberg and former State Treasurer Steve Grossman, plus close to fifty state senators and representatives!

Divestment is simple: it means withdrawing our investments in the oil, coal and gas companies that are destroying our climate. It's is a powerful tactic for advancing climate justice -- by divesting, we can:

Make our money follow our climate commitment. Massachusetts has the most ambitious climate change legislation in the nation (in the Global Warming Solutions Act). Yet we undo this progress by investing in companies that stand in the way of reducing carbon emissions and transitioning to a clean, renewable energy future. 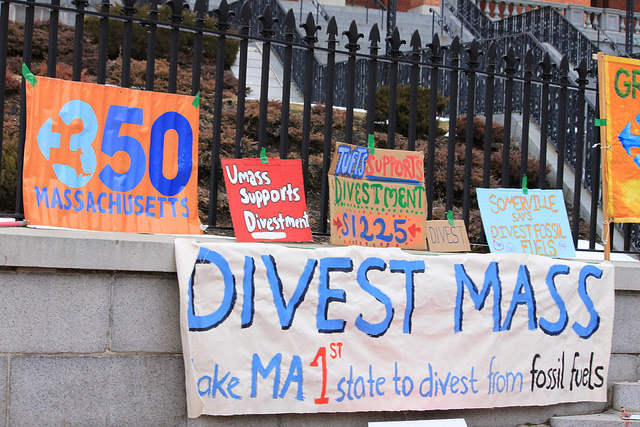 Weaken the political influence of polluting industries. Barriers to meaningful action on global climate change are political, not technological. The fossil fuel industry buys political influence and blocks necessary controls on carbon emissions. By divesting, we send a clear signal to policymakers that the destructive behavior of oil, coal and gas companies is no longer acceptable.

Highlight the ethical implications of climate change. Past divestment movements (from tobacco companies, from companies that supported apartheid in South Africa, etc.) were effective because they served as a moral call to action. By calling for divestment, we ask our institutions to recognize global warming as a social justice issue that demands immediate action. We force decision-makers to acknowledge that if they remain invested in fossil fuels, they are complicit in creating the climate crisis.

Protect our pension fund. A growing chorus of financial experts is pointing out that fossil fuel stocks are inherently risky. The value of fossil fuel companies depends on their reserves of oil, coal and gas -- reserves that need to stay in the ground to have any hope of avoiding dangerous climate change. We need to divest before the carbon bubble bursts.