Leaders must walk the talk on climate

Mayors and other local officials are recognizing the vital need for their leadership on climate change. Last year, the US Conference of Mayors—a body of over 1,400 mayors from across the country—passed a resolution supporting 100% renewable energy. Over the past year, dozens of mayors committed to transition to 100% renewables, and some local leaders have stepped up even more.Portland, Oregon passed a ban on new fossil fuel infrastructure, and New York City pledged to divest from fossil fuels.

However, many mayors—like Boston Mayor Marty Walsh—have not backed up their bold promises with real steps. So when 350 Mass learned that Boston would be hosting 2018’s US Conference of Mayors, we gathered with local and state partners and our friends at 350.org to plan a day of people-powered action to pressure Marty Walsh and mayors from across the country to fulfill their promises.

Instead of standing strong for the Fossil Free future Boston needs, Walsh has been trying to have it both ways on climate action. Despite passing a widely-publicized initiative for Boston to be “carbon free” by 2050, the Walsh administration approved a mile-long fracked gas pipeline to fuel luxury high rises. Seven months ago, after a strong grassroots campaign, the Boston City Council unanimously passed Community Choice Energy (CCE), which would allow the city of Boston to negotiate with energy suppliers for a higher percentage of renewable energy and better prices. Community Choice Energy is a vital step in Boston’s journey to a Fossil Free future, but the Walsh administration has delayed its implementation. Delay is a tactic that the fossil fuel industry has used for decades. Delaying climate action costs human lives. 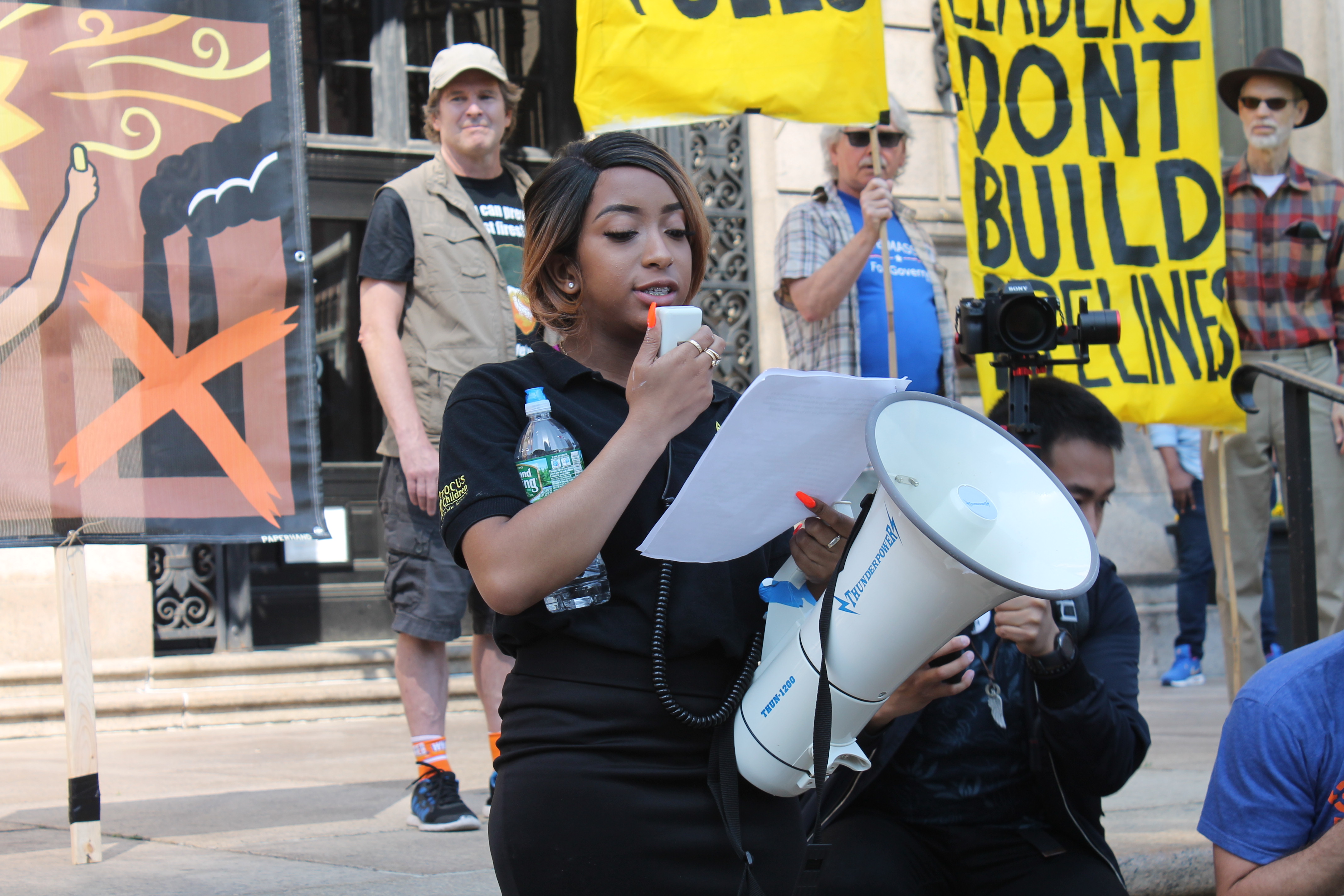 On the morning of Friday, June 8th, more than 250 activists gathered at the Boston Public Library to march through the streets while the US Conference of Mayors held their opening press conference at a nearby hotel. Beautiful dawn-orange vertical banners framed the crowd, reading “100% Renewables For All” and “Fossil Free.”

Kerry Labrador of the Mi'kmaq nation, Passamaquoddy tribe and Resist the Pipeline, began the rally by powerfully telling the crowd why she was there that day, "I stand here to fight corporations chasing the almighty dollar...pipelines continue 500 years of colonial violence on Turtle Island,” she cried. “I stand here to fight back and protect my sacred Mother Earth… Say it with me: ‘Rise, Resist, Reclaim!’”

Dwaign Tyndal, Executive Director of Boston environmental justice group Alternatives for Community and Environment (ACE) addressed the rally as well: "People in the historically Black neighborhoods in Boston, Roxbury, are already suffering from climate change, poor air quality, heat sinks. They can't breathe right now! Can we build a movement around that? Let’s build that base!”

Then, Norsha Hydol, of the Boston Student Advisory Council (BSAC), a youth leader who had just graduated from high school the previous day, spoke about how the climate crisis had already impacted her life. Her family members’ homes in South Boston flooded multiple times this year. Norsha called on the mayors to do more to protect families like hers—and shared some of the uplifting work that she and BSAC have done: creating and distributing a climate justice curriculum for schools, reducing their school’s energy use, and lobbying and testifying for state legislation on environmental justice and city ordinances—like the Community Choice Energy initiative Marty Walsh has been stalling for seven months.

Kerry, Dwaign, and Norsha showed us is what real leadership on climate change looks like. To protect our people and the planet, that’s the kind of bold leadership we need to see  from every elected official in the country. 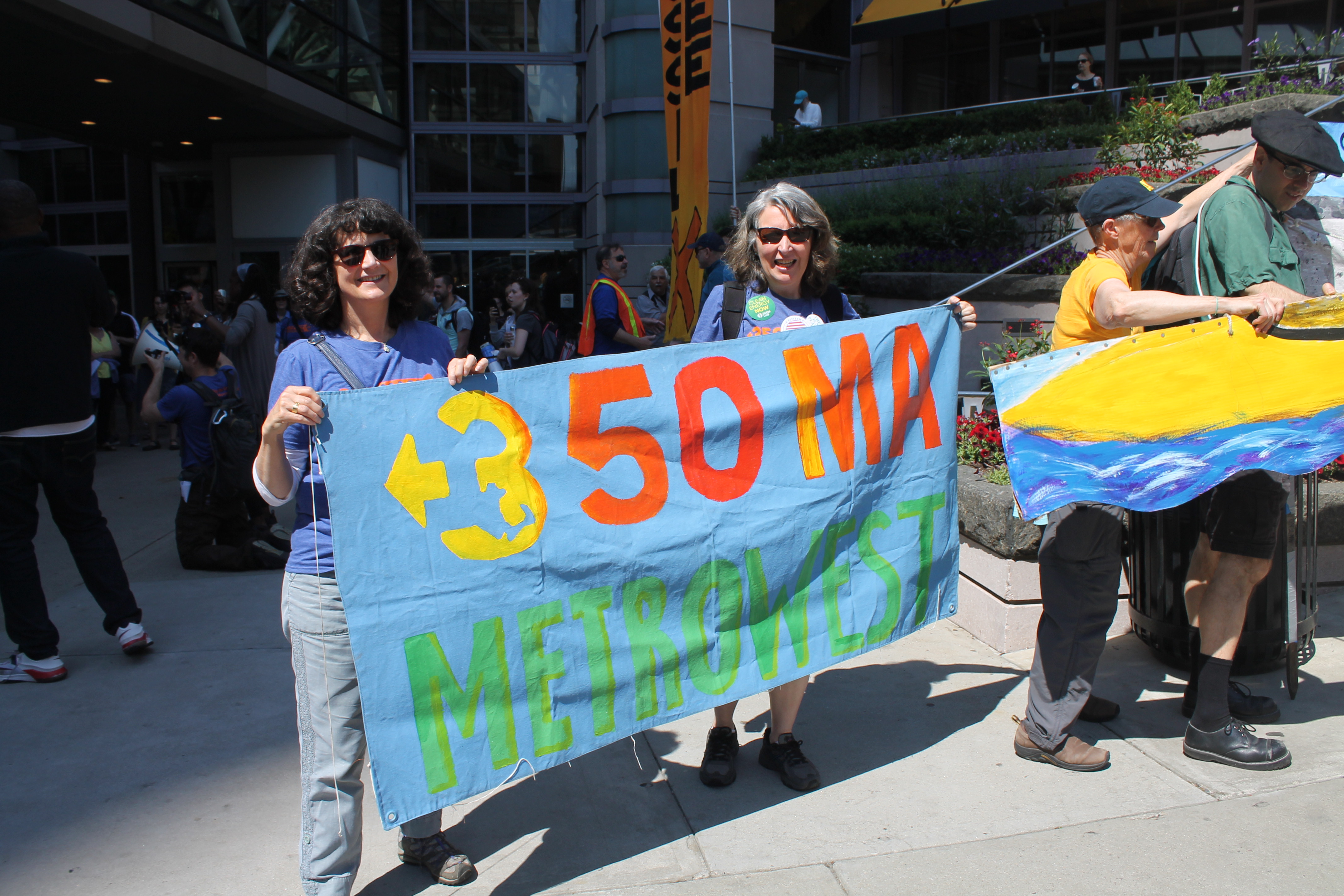 After local leaders’ moving speeches, the crowd of hundreds began to march down Huntington Ave to demonstrate outside the hotel where the Mayors Conference was meeting. Lu Aya of the Peace Poets led us in chants that morphed into songs: “Ask the mayors who they work for, us or corporations? Our communities are worth more than empty declarations!”

Only Mayor Tom Butt of Richmond, CA was courageous enough to come outside to join our picket line. But the other mayors inside the conference couldn’t ignore us: while we marched outside, a large screen displaying a Twitter feed of the hashtag #USCM2018 was flooded by tweet after tweet from people at the rally and around the country demanding bold climate action from their local leaders.

That evening the mayors gathered for a clambake on the lawn of the JFK Library in South Boston, where they were met by fifteen activists in kayaks and a canoe. While several supporters followed from the land, we paddled into Boston Harbor toward the mayors’ soirée. The boats assembled into formation and glided toward the shore holding signs that read, “Walk the Talk on Climate” on one side and on the other, “US Mayors: Stop Fracked Gas.”

Over the megaphone, I implored the mayors to show leadership in the face of this crisis. As a new parent, climate change puts my loved ones at risk, along with the loved ones of billions of people around the world. Real leadership requires standing up to big polluters, halting new fossil fuel projects, divesting from climate-wrecking industries, and taking action for a just and equitable transition to 100% renewable energy for all. 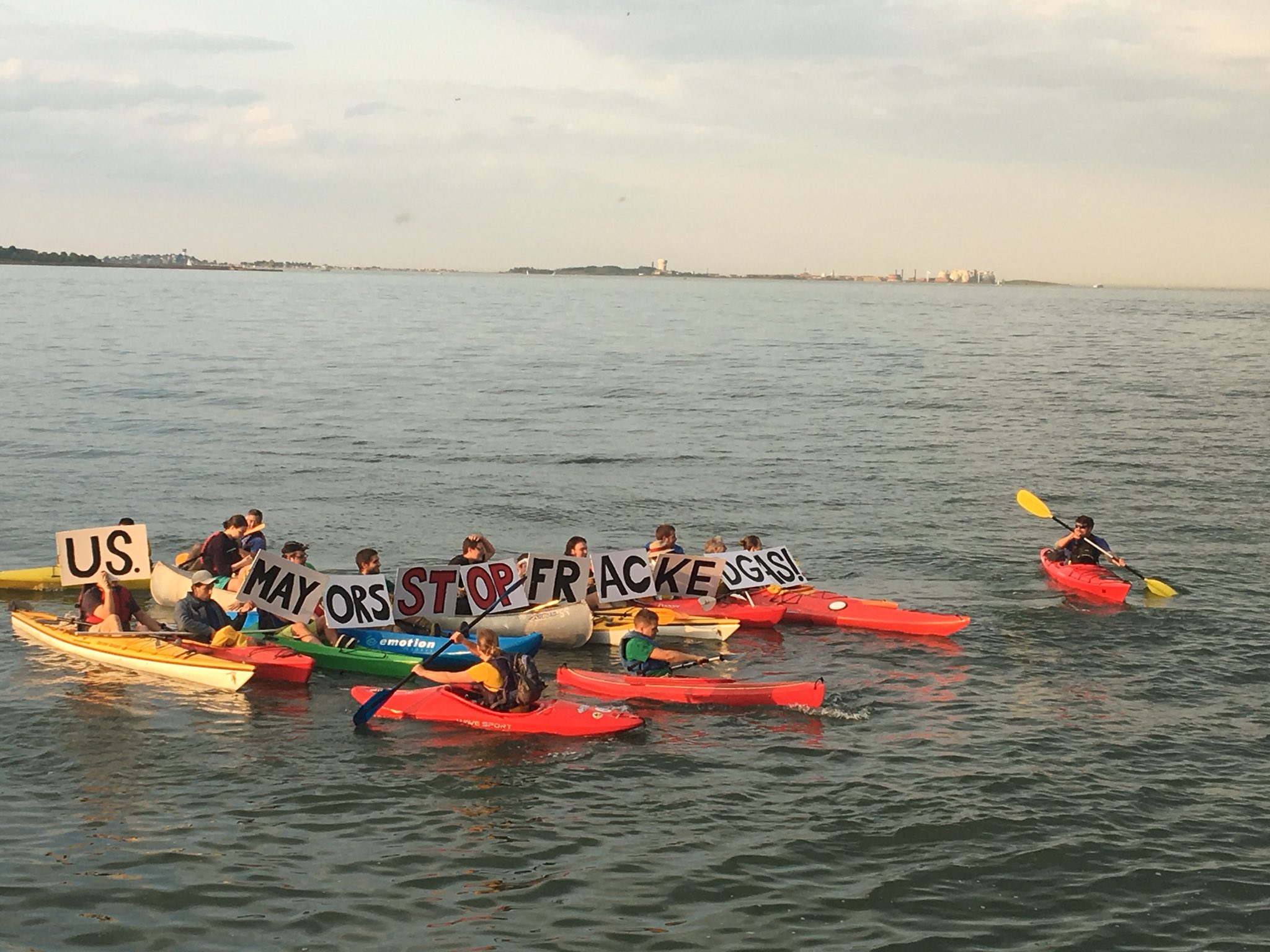 The US Conference of Mayors provided an opportunity to mobilize and build momentum for our Fossil Free campaigns, and to form new and stronger collaborations among local, state and national organizations. One day of action alone may not stop climate change—but on June 8, we sent a message that we the people will not accept empty promises and delays.

By taking action, we discover what we are capable of, and reveal how we must grow. In order to build the power we need to get the change that we want, we must build strong alliances with folks who are on the front lines of the climate crisis right now, and with movements for justice in all forms. We will continue to organize, build power, and escalate actions to hold those representing us accountable.

That’s why in just three months, on September 8th, municipal and state-level leaders will gather in California for the Global Climate Action Summit on climate change—and thousands of people will be there to meet them, with thousands more standing in solidarity with actions from coast to coast. On this global day of action, our movement will Rise for climate justice and challenge those in positions of power to stop bending over backward for big polluters and instead be accomplices in the rebellion against the fossil fuel industry .

Paddling back toward the sunset and the Boston city skyline, we sang, “fossil fuels are over now, this is the beginning. You can feel it coming, it’s a just transition.”

The US Mayors Walk the Talk rally was organized by a dozen community-based and state-wide organizations including: 350 Mass, Boston Climate Action Network, Massachusetts Sierra Club, Mothers Out Front, Conservation Law Foundation, Sunrise Movement, Youth on Board, Elders Climate Action Network, We Are Boston’s Waterfront, and the Boston Clean Energy Coalition. "