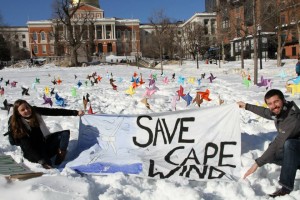 Saturday's rally to #SaveCapeWind was a tremendous success, with 300+ people in attendance and great media coverage from The Boston Globe, The Boston Herald, WGBH, Dig Boston, Fox25 News, The Associated Press, and other outlets!

It was a stunning day with perfect weather. We planted 130 beautiful rainbow pinwheels in the snow to symbolize the 130 turbines of Cape Wind, and it made for a wonderful visual -- check out some of the great photos from the day here. 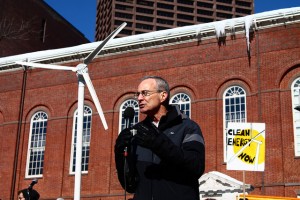 As Jim Gordon, developer of Cape Wind, said during Saturday's rally, we are not giving up -- we have only just begun to fight.

Emergency Meeting to Save Cape Wind

The response to yesterday's email about an emergency meeting to save Cape Wind has been remarkable, with more than 200 people expressing interest over the last 24 hours.We'll be hosting two meetings today, Saturday, January 17: first, from 11 am to 1 pm, we'll meet at the Central Square Branch of the Cambridge Public Library (45 Pearl St in Cambridge) to think through our strategy. This will be a smaller gathering, and we're especially hoping that those who wish to play a leadership role in this effort will be there. Bring a lunch if you can, although we'll also have a chance to grab food between 1-2 pm. Then, from 2-4 pm, we'll convene a larger meeting at First Church Cambridge (11 Garden St in Cambridge). We'll share our plan for saving Cape Wind and figure out how to carry the work forward in teams that will form and begin working on the spot. If you can only make it to one meeting, come to the afternoon session!

On only a few days notice, incredible local organizers organized #NoKXL vigils all over the state on Tuesday, January 13. 100+ people in Cambridge, 75 people in Northampton, and dozens more in Worcester, on Martha's Vineyard, in Sharon, in Newton and in Williamstown stood strong to say no to Keystone XL and the tar sands. More than 100 rallies and vigils were organized nationwide!