Lunch at the Bastille

On Wed., Nov. 30, 2022 ISO-NE*, had its’ biannual election for the Coordinating Committee of the Consumer Liaison Group (CLGCC) of this regional grid operator. This forum has traditionally been a rubber stamp group that ISO delivers content to, and then entertains Q & A. This ‘content’ reflects how New England will source and deliver energy to rate payers. As an example of their modus operandi, MMWEC** several years ago developed a plan for the building of a large battery storage facility and submitted it to ISO. They were told that they could not build it because it would “destabilize” the market, meaning that stored energy from renewable sources would be so inexpensive, no one would buy fossil fuels anymore.

Can you doubt from this where ISO-NE’s allegiances lie? A number of CLG members had wanted to educate ISO about the catastrophe already taking place due to our energy sourcing, but have always faced sizable internal opposition. In addition, the CLG has no legal/decision making standing in the process, but, with a friendly Coordinating Committee could bring consumers real interests to the fore and create an authentic dialogue with the ISO.

Enter No Coal No Gas, an organization originally started to shut down the last New England coal burning plant, the Merrimack Generating Station, in Bow, NH, and has spread its wings to include all regional concerns that reflect the amorality of burning coal and building fracked gas infrastructure. They decided that it was time to put some teeth in an ‘advisory’ group that is supposed to represent rate payers and developed a brilliant, yet simple, strategy. It was to reach across a broad spectrum of climate allies, ask them to sign up as citizen members of ISO-NE and register to attend the event on Wednesday at which the election of new board members would take place. They were simultaneously recruiting strong candidates to fill the positions of those who had stood as obstructions to clean energy. (See a slate of climate activists and allies)

And come, we did. We car pooled, took commuter rail, subways, and walked to the Colonnade Hotel in Boston. Looking around, you couldn’t be filled with anything but hope seeing allies from at least 7 different climate organizations, getting our name tags, and lining up for the buffet (chicken and/or fish-no tofu). Between 90-110 of us showed up and the ISO staff registering guests said it was the largest gathering, for this event, that they had ever seen.

The only black cloud was the keynote speaker, James Danly, an attorney who had served as FERC's general counsel and was nominated by Trump in 2019 to serve as it chairman. To say he is a neanderthal cast unnecessary aspersions upon our predecessors. To hear decades old tropes come from his mouth such as "The wind doesn't always blow, and the sun doesn't always shine, so we must maintain our reliance on fossil fuels” made me wonder if he came to us from the 1970s. Also, his insistence that climate and justice issues, which many questioned him about, have no place in FERC’s purview is simply terrifying. If our federal agency isn't taking notice of environmental collapse due to the use of fossil fuels and that that collapse first and most profoundly injures the poor, then what is the point of a centralized national agency to supervise energy needs and production? Small mercies, he didn’t hold the podium for long and has been replaced, as chair, by Richard Glick.

After the rousing keynote, we were more than ready to vote. Our entire slate and allies who were already serving won their elections. Now we will see what this group, as a united front, can do to influence the future direction of ISO-NE. We owe a huge debt of gratitude to No Coal No Gas for developing and carrying through this strategy. Honestly, for a change, it was a pleasure having lunch at, instead of storming the Bastille. However, since it was on the ratepayer’s dimer, most of us suggested that the next time we meet, it should be at a VFW hall and we bring our own PB&J sandwiches.

*Independent Systems Operator for New England, which determines and coordinates what the needs of the electric grid with be for near and the far flung the future. The power invested in them comes from FREC (Federal Energy Regulatory Commission) which confirms projects that line up with those projections.

***Press release from event from No Coal No Gas 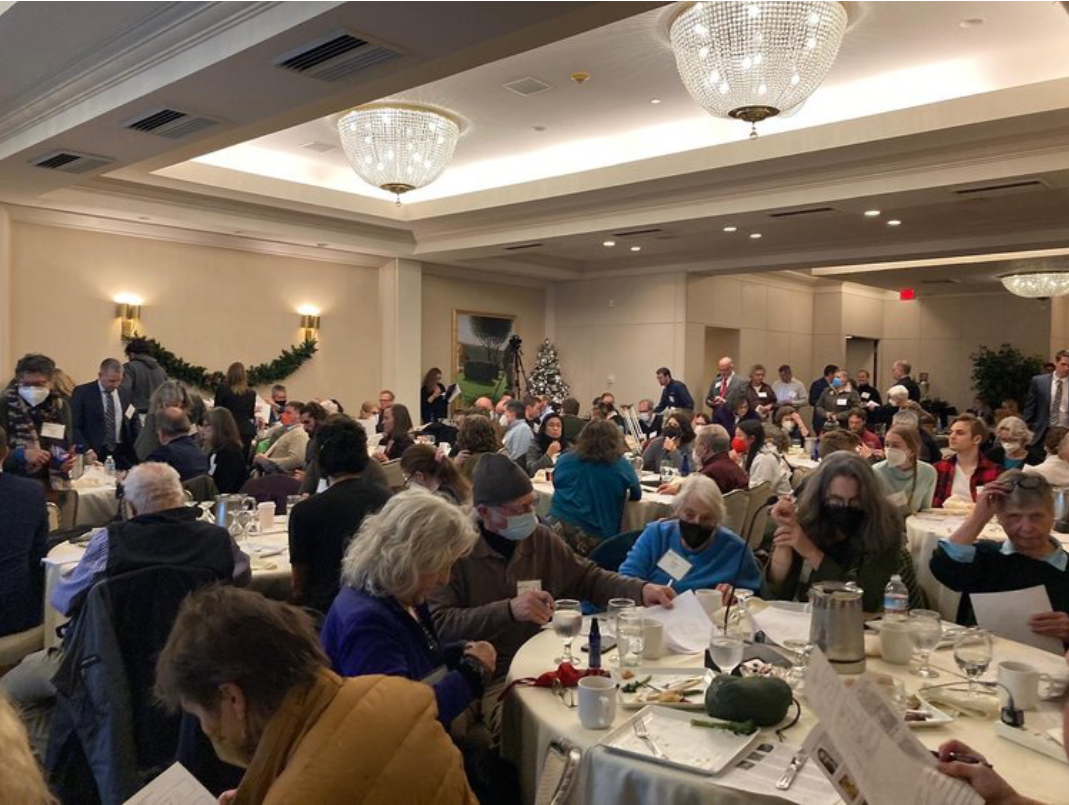